Welcome back to my post-mortem series looking back at building a Flappy Bird clone playable on actual Nintendo 64 hardware. This second part is an exploration of starting a project with the libdragon N64 homebrew toolchain. We will be compiling and installing an open-source N64 software development kit from source and using it to build and test an N64 ROM in an emulator.

Check out the other posts in this series:

libdragon expects the N64 SDK installation directory to be exported as the N64_INST variable in your shell. I have ensured that this variable is properly set in my bash sessions by adding it to ~/.bashrc (or ~/.bash_profile on MacOS):

My preferred computing enviroment du jour is Arch Linux, so in the spirit of the bleeding edge, I have made some minor modifications to libdragon in order to resolve compilation issues I encountered and bumped the build dependency versions to the latest and greatest. You can clone my fork of libdragon if you’re following along at home:

Who compiles the compilers?

Next, we will need to download, compile, and install a mips64vr4300 toolchain into $N64_INST in order to build libdragon. This will take quite a while, so sit back and enjoy the show as binutils, gcc (pass 1), newlib, and gcc (pass 2) configures, compiles, and installs before your very eyes.

Finally, we are ready to build and install libdragon and its supporting tools into $N64_INST:

Starting with a known-good working ROM

If all went well with the previous steps, we should be all set up and ready to build our first N64 ROM. We can verify that the toolchain installed correctly by compiling one of the examples included in libdragon:

We now should have a spritemap.z64 ROM file that’s ready to be fed into an N64 emulator or flash cartridge. 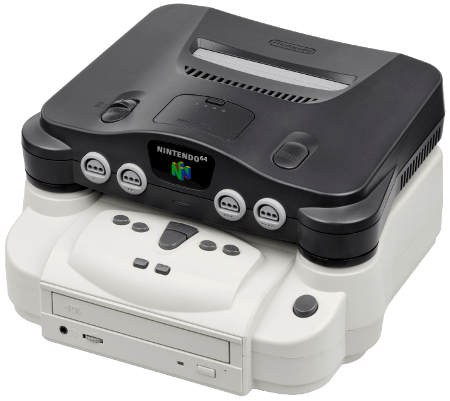 Thanks to the popularity of the Doctor V64 development device (pictured above) and a modified BIOS that allowed copying cartridge data over the V64’s parallel port, the V64 format is quite common in the N64 backup/emulation scene. Another popular device for dumping N64 ROMs was the Mr. Backup Z64 (pictured below), which produced files in the Z64 format onto ZIP-100 diskettes. 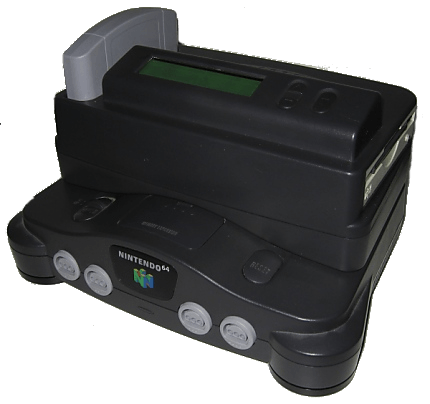 Byte-ordering is an artifact of CPU architecture that dictates how multiple bytes are combined to store larger values in memory. The Nintendo 64’s MIPS VR4300 CPU (as well as PowerPC CPUs) stores the most-significant byte (MSB) first, whereas Intel CPUs natively store the least-significant byte (LSB) in the lowest address. As you can see in the comparison below, the game title in the ROM header is clearly readable in Z64 format, but a garbled mess in the V64 format: 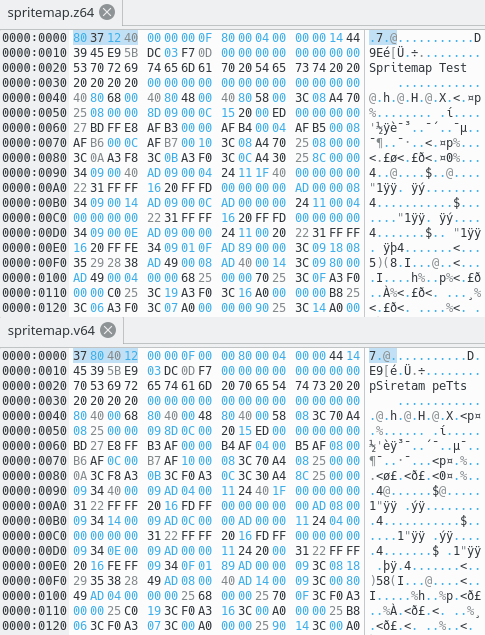 Some emulators are generous and will happily accept ROMs of either flavor, sometimes even inside of a .zip of .7z archive. In order to load ROMs with CEN64 you must provide a “Z64 big-endian (not byte-swapped) format” ROM instead of the “V64 little-endian (byte-swapped) format”.

Care and feeding of your CEN64

As we covered in part 1, libdragon requires accurate low-level emulation. You will also need a dump of the Nintendo 64 PIF ROM. At the moment, the best emulator I have found to test homebrew is CEN64 by Tyler Stachecki (MarathonMan). I recommend building and running from source to keep up with the latest improvements:

If all that was successful, you should be able to run the cen64 binary with the pifdata.bin PIF ROM and the spritemap.z64 cartridge ROM: 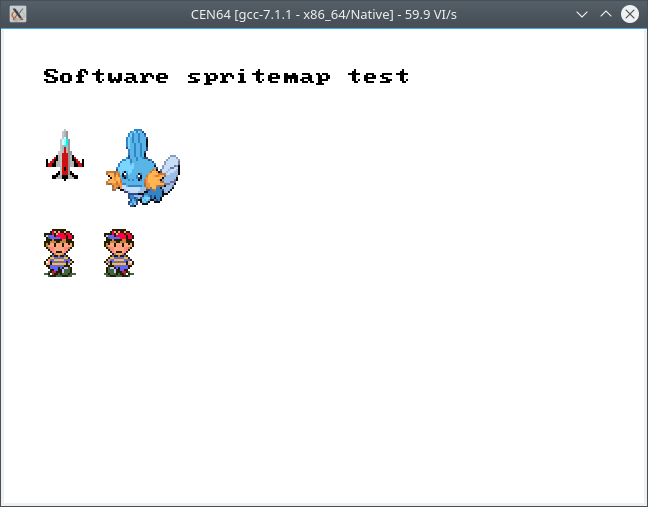 So we’ve just built an N64 ROM, but what exactly is going on? Well there’s four big pieces here according to the Makefile:

The very first thing N64 software must do is initialize the CPU and the system’s peripherals, which we can see at the top of the main function:

Interrupts are necessary to handle low-level hardware events such as timers, DMA, and synchronization with the RCP. The DFS, RDP, controller, and timer subsystems have state that is managed by libdragon, so they must be initialized before their functionality can be used. The display subsystem supports a variety of resolutions, bit depths, gamma correction and antialiasing settings:

The image data in this example has already been converted into 16-bit .sprite files using libdragon’s mksprite tool. These .sprite files can be read directly into the sprite_t data structure provided by graphics.h:

In order to decouple animation timing from runloop speed, this example sets up a timer to fire thirty times per second to increment an animation frame counter:

The rest of the code runs inside of a while(1) block forever (or until the system is powered off). There are five main things that happen every frame in this example:

While all of that is happening, the main loop is also being interrupted every 33.33 milliseconds to service the update_counter timer.

Do you prefer your drawing soft or hard?

The spritemap example has two code-paths for drawing based on the mode flag, which is toggled by pressing ‘A’ on player 1’s controller inside the main loop, and renders the sprites with either software or hardware-accelerated drawing routines. The end result looks identical, but under the hood these two approaches are quite different:

Okay, so now we’ve got a working toolchain and a sample project that gives us the absolute necessities of setting up graphics and controller input. We also have an emulator to test with. At this point we’ve got all the tools we need to get started building our own homebrew on the Nintendo 64. Read on for part 3 of this series for a break-down of how I translated Flappy Bird to suit the limitations of libdragon and the N64 hardware.